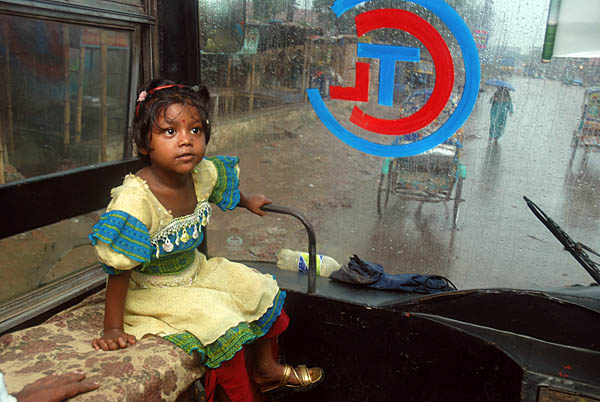 On the road to Fuldi

This morning I caught a bus hoping to explore some of the villages North East of Dhaka. The only problem was that none of the destinations are marked in English but as luck would have it a Bangladeshi woman with impeccable English was sitting in the front row. Moments later Doctor Fawzia Khan told me about her mission and I decided to accompany her. She was going to her families village about 30 km and 3 buses rides away carrying the portrait of her father wrapped in newspaper. It ended up taking us 2 1/2 hours to get there. All of a sudden in the third vehicle (a mini pick-up called a tempo), it started pouring sheets of rain as we bumped along down a muddy single lane surrounded by flooded rice fields, jute plants and lilies, the national flower of Bangladesh. 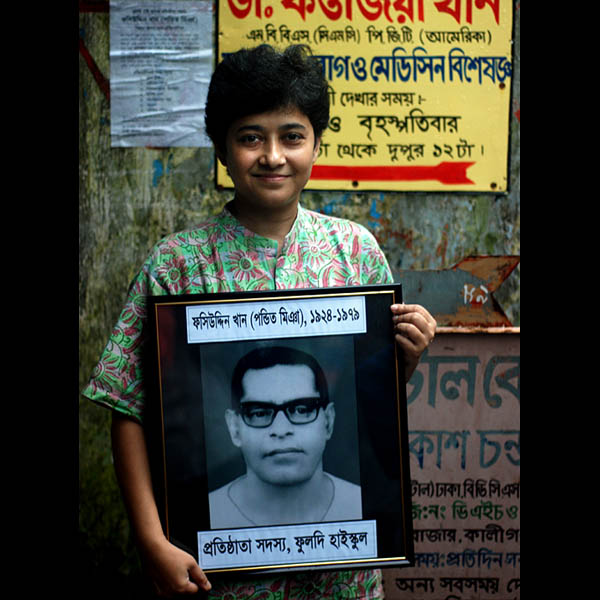 Dr. Khan holding a portrait of her Father

Dr. Khan lived and practiced in Texas for over 12 years but returned to Bangladesh one year ago after her mother passed away. Her father, Fasi Uddin Khan was an educator and Doctor who founded a school in the village we visited. Over 700 students attend that school today. Twice a week Dr. Khan’s mission is to visit her village and treat patients in a small clinic behind a pharmacy. Dr. Khan recently started Shurjobanu Health & Education Foundation (SHEF) in honor of her mother Shamsunnahar Khan. SHEF is already providing scholarships to students of Fuldi high school.

Many of her relatives in the village also practice some form of traditional medicine and for me  she represents the independence and strength of Bangladeshi women. Ten minutes after we arrived the electricity  went off and for the next few hours the place was so dark that it was a challenge to make a photo, even with my light sensitive digital camera. 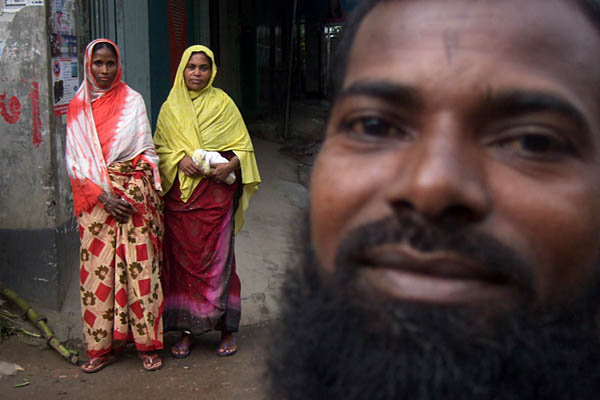 Between differences in timezones (+13hours), the sauna like humitity, people/traffic congestion, days of the weeks signifying something other ( I teach I on Sunday for example which is like  our Monday back home) and the noise levels that are off the charts it’s no wonder that at times I feel a little dislocated. Oh and from what I’ve seen it’s rare to find street names posted. I’m slowly beginning to recognize landmarks to help orientate myself around this maze of a city. 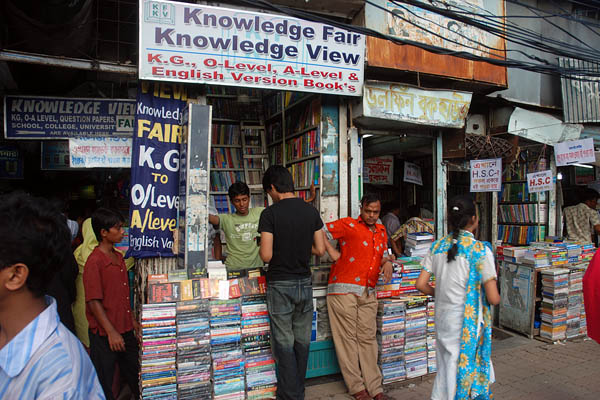 The Book Market in Dhaka

I had read on Rezwan’s blog that one in every five Bangladeshi’s with internet access has a facebook account so I decided to poll my students on the first day of class. It turns out that eighty percent of them do. I started using facebook to “communicate” with some of the photographers on Verve Photo which goes to show that you can teach an old dog new tricks. I’m not sure if I totally get it but that’s another story.

Five minutes before class the power went out in the computer lab – something that’s not uncommon called “load shedding”. Fortunately it returned a few minutes later in time to give my students an introduction to blogging. The above photo was shot in the new market, part of which is filled with hundreds of book stalls. You can find practically anything pirated and even place special requests that will be photocopied and bound in a few days time. 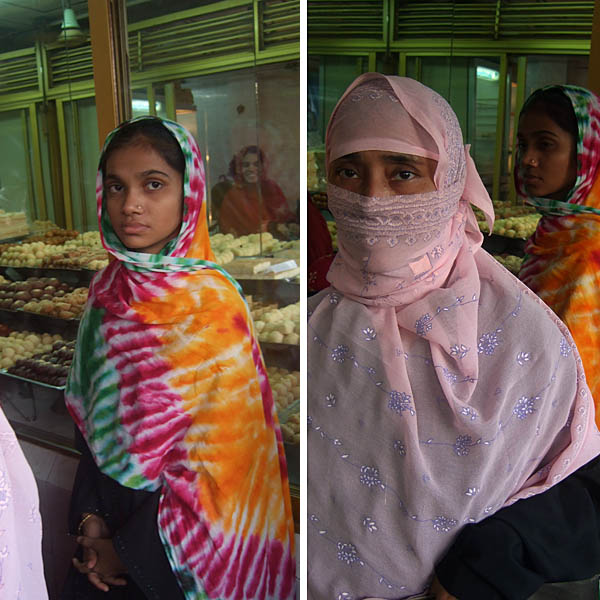 Shopping for sweets at the New Market

I’m not sure if they are mother and daughter but sensed they were. The “New Market” in central Dhaka encompasses several blocks and was filled with people. In situations like this it’s easy to get swept away by the energy of the crowd but the tie dye scarf stopped me in my tracks.

The TV Room in my Guest House

I dedicate this photo to my old Brazilian friend Gil Prates. Gil is an amazing photographer who always sees things in unexpected ways. I lived with him in Rio for a year. In a strange kind of way the apartment building I’m living in here reminds of Gil’s place in Ipanema. This six story building is called the Scenic Panorama and this morning I discovered that I have roof access. I’m lucky to have a relatively calm place to return to after being in the middle of all the chaos just a few minutes away. 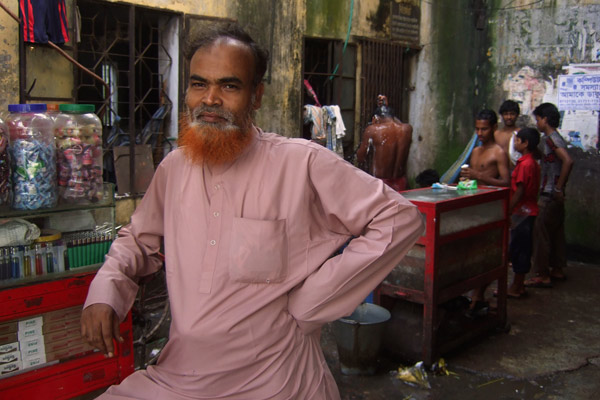 Right now I’m listening to the “Dead Man Walking” soundtrack. There’s a wonderful track from the late Nusrat Fateh Ali Khan called “Face of Love” that I really connect with here in Dhaka. Been shooting so many portraits so please bear with me. I’m not used to such cooperative “subjects”. I had heard that Bangladesh was a wonderful place to photograph but nothing prepared me for this. There are some I’m sure who will play the devils advocate and say but you are an outsider- you are treated differently. I beg to differ and take things at face value. What you see is what you get. 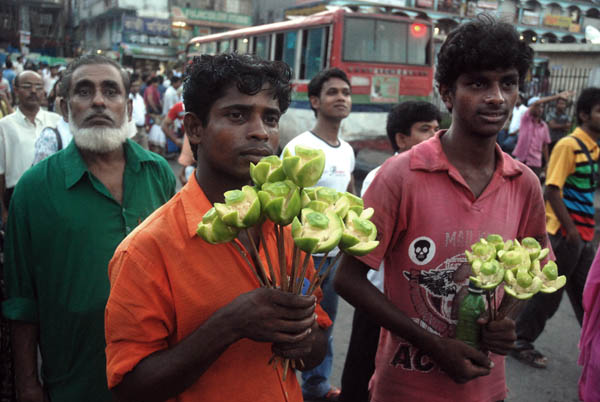 This morning I attended my security briefing at the American Embassy and later had lunch with Saiful Huq Omi, a very talented Bangladeshi photographer. Omi took me over to Drik photo agency and the Pathshala South Asia Institute of Photography. These are both internationally respected institutions founded by Shahidul Alam. In the late afternoon Omi dropped me off in central Dhaka. The amount of people was staggering- wide avenues like in New York or Paris completely packed with people. On the way back home the streets were almost completely dark because of a power outage, a not uncommon occurrence here. 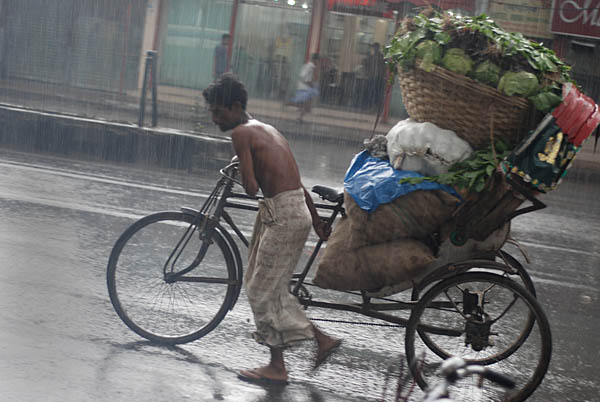 We are still in the midst of the rainy season and even for someone from Oregon the rains are impressive. At least it cools everything off. This is what it looked like at the intersection close to my guest house this morning. One of the teachers at IUB told me that just a few weeks ago people used boats for transport on the street that I live on. At least I’m on the third floor. 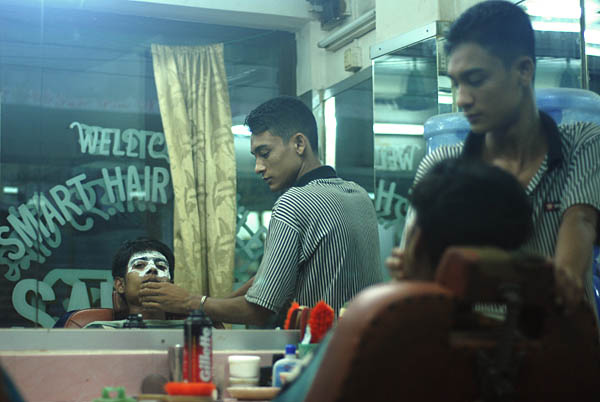 This afternoon I had one of the best haircuts of my life. With all due respect to KC- my hair stylist  in Portland for over 10 years- this young man spent well over an hour on all the finer details including a very robust upper body massage. As in Burma I notice so many of the people here -including the man on the street-  are extremely well groomed and very striking. I must admit that he didn’t shave my forehead though. Many of the Muslim men dye their hair and beards red. I was told it’s a vanity thing since many of them are going grey but I also heard that one of the prophets also had a red beard. Maybe I’ll give that a try next time.